Introduction :
Bruges is the capital and largest city in the West Flanders province of Belgium. Measuring an area of 138 square km, Bruges is a historical city center of Medieval Europe and a prominent World Heritage Site of UNESCO since year 2000. The city is oval in shape and is built on a canal based system and is one of the cities referred to as “The Venice of the North”. Bruges is a popular tourist attraction in Europe today and is famous for its charming historical houses and beautiful canals surrounding it.

The Beguinage of Bruges
Image attribution to ser_is_snarkish @ Flickr

Some attractions :
Historic center of Bruges – World Heritage Site area where you can walk on foot and enjoy the beautiful medieval buildings around it.

Basilica of the Holy Blood – Built in the 12th century and houses the venerated relic of the holy blood believed to be collected by Joseph of Arimathea.

The Markt – A square in the central of the town and home to hundreds of gift shops and lots of restaurants.

History :
First traces of human activities in Bruges date back to the Pre-Roman Gaul era where fortifications were built after the Roman conquest of Menapii in around 100 BC and has been an important fortification in the Flemish coastal area to prevent Viking incursions. Bruges received its city charter in 1128 and new walls and canals were built. Gradual sliting since 1050 caused the city to lose direct access to the sea but access was resumed in 1134 naturally by a storm that created the Zwin channel and it soon became the commercial outpost of Bruges. At some point during the 15th century, it was the chief commercial city of the world thanks to its port until sliting denied access to the sea again at the beginning of the 16th century. The city soon fell being Antwerp and gradually declined until tourism picked up in the 19th century and it was soon the world’s first tourist destinations attracting wealthy British and French.

Inside the Church of our Lady
Image attribution to djstanek @ Flickr

Introduction :
The Marble Cathedral is a network of marble caves located in the central of Lake General Carrera in the Patagonia region of Chile. It is widely regarding as the most beautiful cave networks with its naturally carved marble sculptures combined with the breathtaking azure blue color waters around which were the result of the glaciers of the Andes mountain range that feds the lake combining slits from marble cliffs falling into the lake to create the beautiful colors of the water.

Marble cave near to the main land

History :
The geological formation of the marble caves were formed by wave action in Lake General Carrera over 6200 years. The region was first inhabitated by European immigrants between 1900 – 1925 as well as other immigrants of other foreign ancestries. The eruptions of the Hudson Volcano had a severe impact on the local economy during 1971 and 1991. The region was largely isolated until the 1990s when the Carreta Austral highway connected it to the rest of Chile expanding the tourism in the area.

View of the natural sculptures in the caves

Beautiful scenery from the marble cliffs across the lake

Getting there :
The nearest airport to the Marble Cathedral is the Balmaceda Airport (BBA) which is served by flights from the capital city of Santiago as well as major cities of Chile and is around 250 km away from the Lake General Carrera where buses can be taken from Coyhaique. This is followed by a ferry on a small boat at the Puerto Rio Tranquilo.

Introduction :
The Denali National Park is located in the state of Alaska in USA covered by the Denali Borough and the Matanuska-Susitna Borough. The Denali National Park measures a massive area of 19,185 square km and is home to Mount Mckinley which is the third highest peak in the world with an elevation of 6194 metres. The attractions in the national park are the beautiful alpine lakes and forests in the lower elevations, tundra in the mid points and glaciers, rock and snow at the highest elevations. The Denali National Park is host to more than 400,000 visitors annually and is a great place for sceneries, hiking and mountaineering in the pure and untamed wilderness of Alaska.

Alpine forests and lakes at the lower elevations 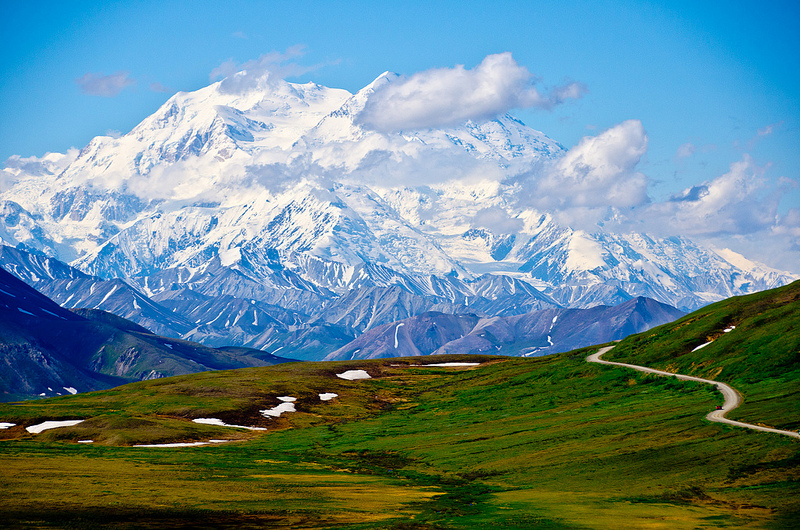 History :
Native Americans were living in the environment since 11,000 years ago using resources the wild provided. In 1907, hunter and naturalist Charles Sheldon took interest in the area and specifically on the Dall sheep and traveled to the region. He returned to Washington and helped to establish the Mount Kinley National Park in 1917. In 1976, President Jimmy Carter designated the park as an international biosphere reserve and finally in 1980, the Denali National Park was formed with the incorporation of the Denali National Monument.

The Grizzly Bear of Denali
Image attribution to Fir0002 @ Flickr

The summit of Mount Mckinley at elevations of over 6000 metres

Getting there :
The nearest airport to the Denali National Park would be the Fairbanks International Airports (FAI) which requires a 2 hour drive to the attraction. The nearest major airport would be the Ted Stevens Anchorage International Airport (ANC) which is a 5 hour drive to the attraction. Most of the flights available are on a seasonal basis.